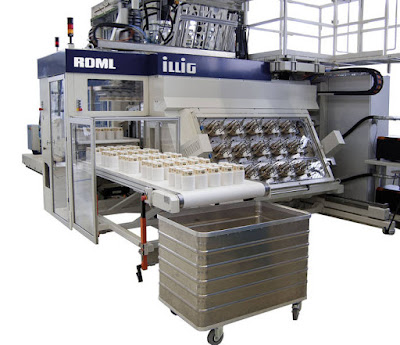 Thermoforming Systems with Decoration, Hygiene and Productivity in Focus
Heilbronn, July 2016 – At his year's K trade fair from 19 to 26 October ILLIG, the systems provider for thermoforming solutions, will be showcasing its latest developments in thermoforming, packaging and mold technology and demonstrating its prowess as a systems partner for automated processes. In focus will be the performance of in-mold labeling in thermoforming (IML-T), hygienic production and enhanced productivity through technical optimization, as well as the systematic expansion of automation. For the first time in its latest stage of development the IML-T thermoforming line IC-RDM 70K together with the compact IML unit RDML 70b for flexible decoration of nearly any cup geometry will be demonstrated at the K 2016. Also making its debut at the K stand will be a flexible product handling system. Adapted for the ILLIG IC-RDK 54, this combination accelerates production for enhanced productivity. Visitors will also get to see the latest in ILLIG mold-making technology with new molds on display.

Leading IML-T technology
ILLIG is currently the only supplier of IML-T that offers all required modules from a single source that have been optimally designed to interoperate with one another. IML-T machines are deployed together with so-called cup machines of the RDM-K series and also integrated in form, fill and seal machines that comply with the stringent hygiene standards of the dairy industry. An automatic IC-RDM 70K roll-fed machine with a forming area of 680 mm x 300 mm coupled with the IML unit RDML 70b will be on display at the K stand to demonstrate the IML-T technology. The 18-cavity mold has an hourly output of approximately 17,280 rectangular polypropylene cups that are simultaneously decorated on all four sides plus the bottom with a brilliant photo-quality label during the forming process.

The RDM-K machines are extremely versatile and can be used for a variety of applications. Equipped with ILLIG-designed coffee-capsule molds, over 30 RDM-K thermoforming systems produce millions of capsules every day around the globe. The machines' reliability also underscore the value of ILLIG's technological know-how.


Another new exhibit at the K will be ILLIG's flexible stacking and packaging system. The product handling system PHF can be easily connected to an ILLIG thermoformer in minimal time and is ideal for applications typically realized on RDK-series machines. The integrated unit allows the removal of stacks, quality assurance measures, and packaging. The removed stacks of formed parts can be packed as stacks in bags in conventional box sizes. Guided procedures for altering settings enable quick retooling, which lets you quickly setup the machine for a new product. At the K trade fair the product handling system will be adapted to an RDK 54 thermoformer. Equipped with a 12-cavity cup mold with a shallow forming segment base, so-called delicatessen cups will be formed out of a transparent APET film with an antiblocking additive.

IML-T for premium-quality decoration and an effective shelf appearance: Brilliantly decorated packaging made of PP and applied simultaneously during the forming process will be demonstrated at the K 2016 on an ILLIG IC-RDML 70 with an 18-cavity mold.

ILLIG's IML-T can apply brilliantly decorated labeling to thermoformed cups of the most varied geometries.

The ILLIG RDK machines are ideal for producing transparent cups for fresh foods, such as meats, and packaging lids, among other applications.
Contact Us 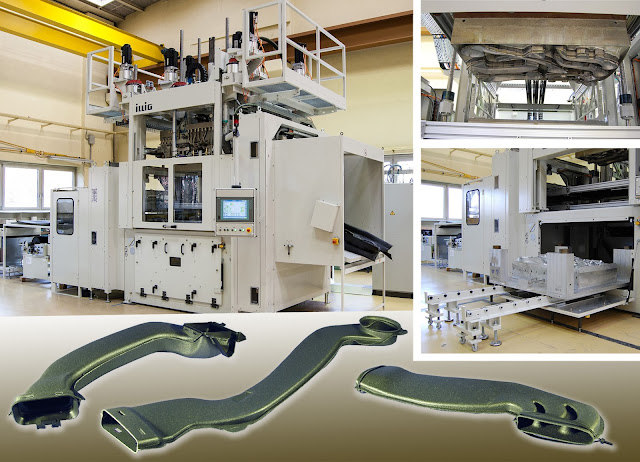 BREYER at K2016 in Düsseldorf.

Save the date today!

We look forward to your visit at our booth at K2016 from October 19 - 26, 2016. Make sure to save this important date!
We will be waiting for you in hall 16, booth C18.
More information to follow shortly.
Kind regards,
BREYER GmbH
Maschinenfabrik